My thanks to MC for providing three more images of covers in his collection, each of them with something special about it.

The first is a Special Delivery cover from Ilkeston in Derbyshire to North Ferriby in Yorkshire in 1968.  In those days Special Delivery meant Special - not like today where it combines Registration with a timed next-day delivery service.


"Under this Service Letters and Parcels are forwarded by Mail in the regular course of post to any Express Delivery Office in the Kingdom, and on arrival there are sent out for delivery by Special Messenger."

The term Express being replaced by Special in 1938. 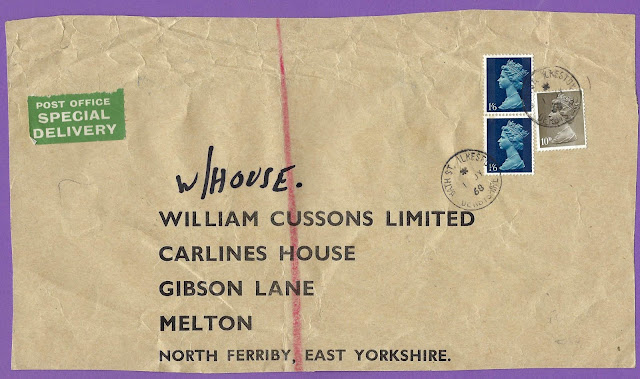 The fee for Special Delivery was 3s (shillings), paid here by the pair of 1/6d stamps.   Back in the day, it was quite likely that the first delivery to this company was so early that no special effort was required by the delivery office and this accompanied the first normal delivery.

Postage is paid by the 10d drab/stone definitive, for the fourth step, 6 - 8 ounces.  Unfortunately this is only a part-front, but for very large packets that is often the case. 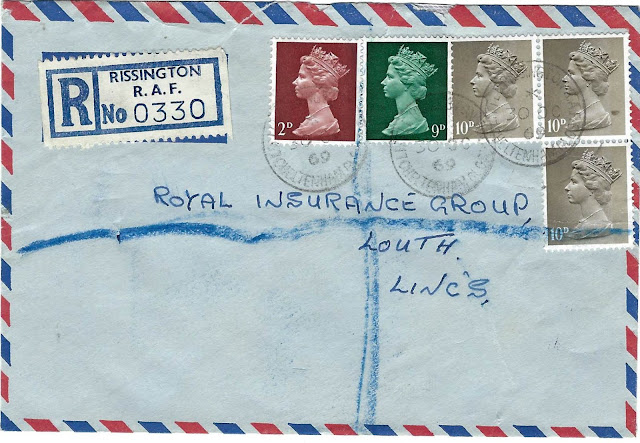 Although this is an airmail envelope, it was not sent by airmail, as RAF Rissington is in Gloucestershire.  I suspect the serviceman sending his insurance premium to Royal Insurance had these envelopes left over from a recent overseas posting and saw no reason not to use them.

The postmark is LITTLE RISSINGTON RAF / CHELTENHAM GLOS although the text is so crammed into the space that if it was incomplete you might read it as 'RAF SO'.  The 1st class letter rate was 5d for the first 4 ounces. and 9d for 4-6 ounces, with the basic registration fee of 3s. Although there were higher registration fees, none would make the rate except the maximum of 3s9d with no postage paid!

UPDATE: oh, the shame of it. No excuse, but it took an American to point out my error (thanks Gary). I mis-read my notes of the fees, and copied that to the total postage.  The postage on this is only 3/5d, so basic letter rate plus basic registration.


The final cover is registered airmail, this time to Canada, from London.  In fact from Trafalgar Square B.O. in London.  And by the type of envelope I would suggest it was sent by Stanley Gibbons or possibly one of the many other stamp dealers in The Strand area.  The giveaway is the mixed pre- and post-decimal day definitives including the 8d red which was replaced by the blue in January 1969 just six months after it was issued.   The date on this item is January 1972. 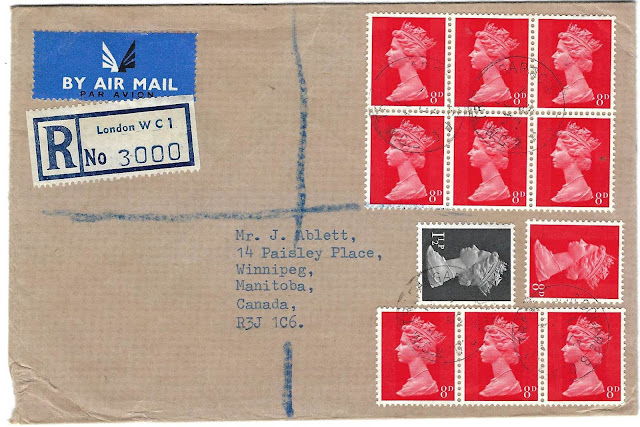 In discussions about whether a cover is commercial or (blatantly) philatelic, this falls between the two.  It is clearly commercial if it is a dealer sending stamps to a customer.  The stamps are 'out of time' in that their usage is three years after they ceased to be sold at the post office.

But a month later they would have been truly 'out of time' and invalidated for postal purposes, so it made sense for the sender to use up what were probably large stocks of a stamp which most collectors at the time already had from when it was first issued.

So it is a mixed franking, commercial, 'just-in-time' cover, and a good example to have in a collection if only to tell the story of how, within weeks, the stamps could not have been used.


There's much more to come, but for now, that's all on the Machin front.