Common stamps - but what were they used for?

The first set of Machin definitives included an 8d in red (or bright vermillion) issued on 1 July 1968. This was just one of the range from ½d to 1/9d replacing the Wilding definitives started in 1952.

But with the 4d brown difficult to process, that value was changed to red, and the 8d to pale blue (light turquoise-blue) on 6 January 1969.  But was there a specific purpose to this value, both colours of which are not at all uncommon in either mint or used condition?

So, how how easy is it to find any examples of these uses on full cover or wrapper today?  Well, I would suggest very difficult.  Newspaper wrappers are usually discarded, bulk printed paper envelopes or packaging are rarely 'attractive' (or small) enough for people to have collected in the past, and of course collectors in foreign destinations would (at that time) want the stamps for the collections.

So although the red had been replaced by the time of the use shown here, it is still scarce enough, and attractive enough to be worthy of including in a postal history usage collection.  These two Printed Paper usages from Norwich to Australia, the red on 26 February and the blue on 20 November 1969 sold fifty years later on eBay for AU$65.99 - £35.50 at present.

But I'm not actually certain what postage rate they were paying, given the above tables! 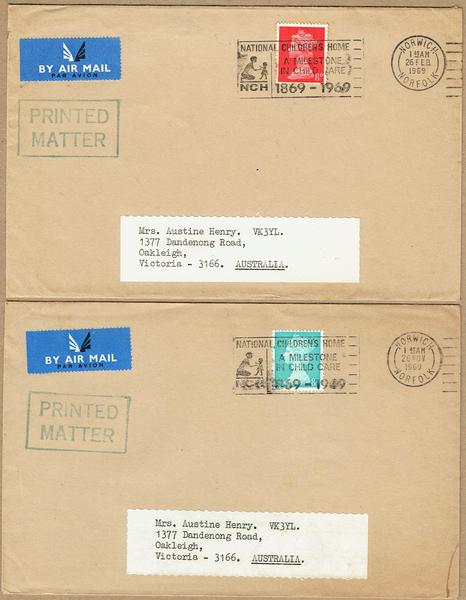 Another aspect of Postal History collecting is the inclusion of at least the name and address of the recipient (and maybe the sender), and sometimes content.  From these pictures we can establish the background of the addressee:

Another outstanding lady [amateur radio] operator was Austine Henry (nee Marshall), VK3YL, first licenced in 1930. In many ways, Austine had similarities with Florence. She constructed her own transmitters, for which she won prizes and was a keen operator who was deeply respected by other amateurs.

In 1934 Austine joined the R.A.A.F. Reserve and during WWII, went on to train many operators in Morse code at the WIA during WWII.

Postal History collectors - certainly the purchaser of this pair - should be grateful that Mrs Henry kept the envelopes in which, presumably, she received QSL cards (confirmation of radio contact from other radio amateurs.\