Odd-looking postal rates are likely to be right!

Most people can recognise an obviously philatelic cover, with excess postage or out-of-period (albeit valid) usage.  The logical conclusion of this is that most people can also recognise a cover which is properly stamped at a proper rate using stamps available at the time.

Sometimes, however, you find a cover with a postage rate that almost has to be right, because nobody would make it that wrong!

Here are three pieces which I picked up at London's Spring Stampex.  The first is a surface-mail picture postcard from Newquay, Cornwall, to South Carolina on 13 September 1968.  Stamped with a 5d blue Machin definitive (SG 735) it doesn't look odd, because we are used to seeing so many inland letters and cards with this stamp from 1968-71.  But that rate took effect later, from 16 September.

The 5d rate for surface postcards worldwide ran from 3.10.1966 to decimal day (15.2.71).  The Machin stamp was issued on 1.7.1968.  So although the 5d Machin on a postcard in this period is not unusual, it is interesting to see it used before it served the same purpose on inland mail. 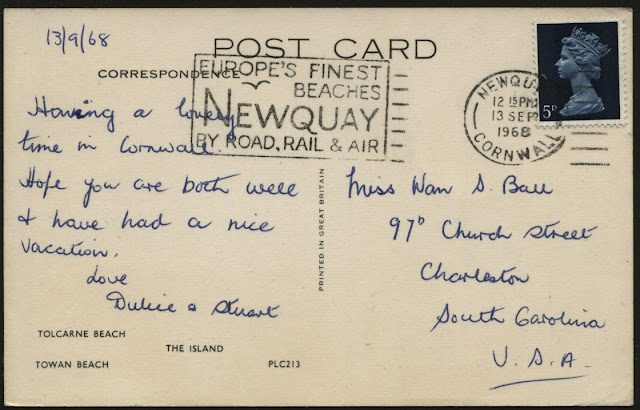 The second is a small (125 x 80 mm) unsealed envelope containing a card.  This was sent from Romford, Essex, to South Carolina on 8 November 1983 with 14½p postage paid by a 12½p and 2p Machin definitives.  An unusual rate, but by the unusual combination of stamps, I deduced that it was probably 'right'.  And so it proved.  This is the first step (20 g) Printed Paper Rate for letters worldwide. 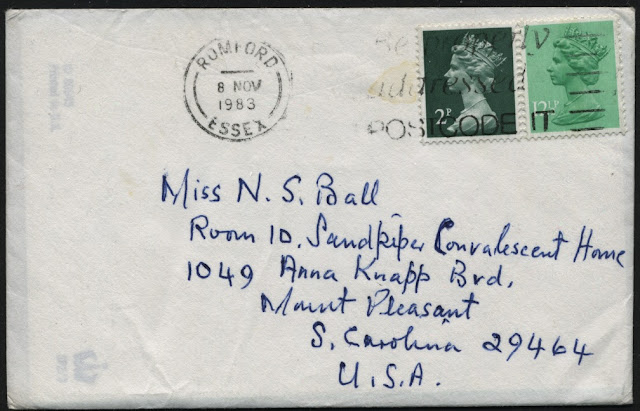 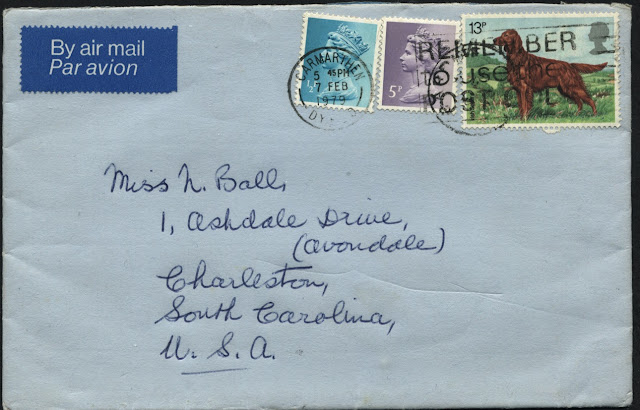 So although it happens to be a first day cover - and indeed it may have been used deliberately on the day of issue - it's a perfectly correct non-philatelic cover.

I think if you went to a dozen dealers looking for these last two, you probably wouldn't find anything at those rates, even with other stamps to make up the rates.