I promised that I would be doing so more on this blog soon, and I'm starting by showing a puzzle sent to me by a reader, MC.

Royal Mail introduced registered envelopes in 1878 and the last produced that showed a value was in 1984.  From 1986 envelopes with NVI indicia were issued, in two main sizes, G H and K, but within these first two there were 5 different variants!  And that was only the first NVI design as shown below. 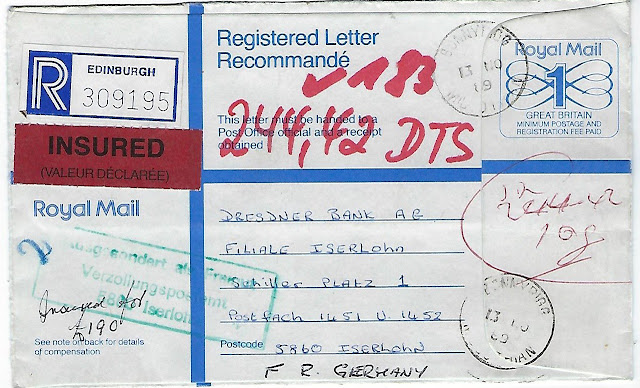 Sent from Edinburgh to Germany on 13 November 1989.  This is prepaid for the minimum postage and registration fee within the UK, but between 1986 and 1998 there was also a concessionary reduced minimum rate for EEC destinations, equal to the basic first class inland letter rate. It applied to all-up mail to 1991 and airmail thereafter.  This means that no extra postage was necessary on this letter to Germany, provided it was under 60 g in weight.

But what about the insurance?  According to the GBPS website postage rate pages (open free to non-members) the fee for insurance over £150 and up to £300 was £1.80 - yet there is no sign of any extra postage.

It beats me how letters which must be handed over the counter at a Post Office ever get processed with insufficient postage. 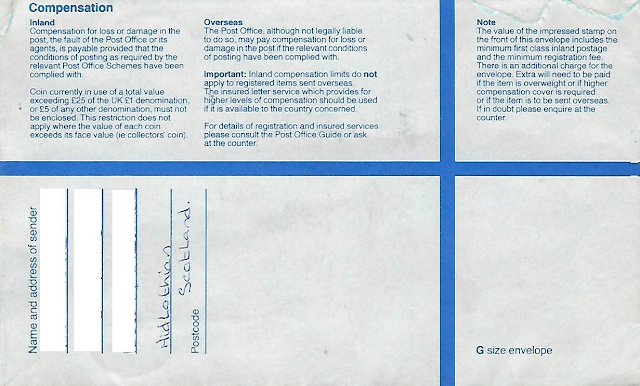 I don't have any ideas - other than the obvious one that somebody made a mistake - there's no obvious sign of missing stamps.

Does anybody else have any idea?