Recent acquisitions: a 1972 parcel tag and an enigma

As I haven't had time to sort through my collection into any order, and thereby make some properly structured posts, the next few will be recent acquisitions - more or less as I get them, or at least as I finish researching them.

This 1972 Parcel Tag originated in Norwich in 1972.  Although the parcel postmark is not clear, the nursery kindly added the date at the right and of course their return address is printed on the tag.

Evidently there was something wrong with the address, and the plants were returned.  Coincidentally there is (now at least) a garden centre in Orchard Road, Coton, Cambridgeshire, where Mrs R P Barnes may have lived once. 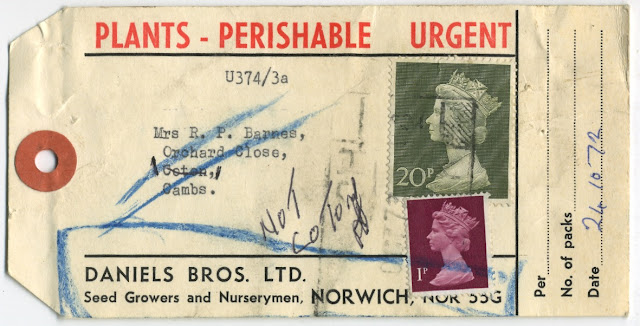 
This other cover, though, is something of an enigma.  I bought it knowing that it was almost certainly wrong!  It's been sent by Recorded Delivery (apparently), on 24 May 1975? - I couldn't be sure.  But I did know that on decimal day, 15 February 1917, the minimum inland postage rate was 2½p - and recorded delivery had been 9d, becoming 4p on decimalisation.  So the postage had to be at least 6½p, not the 5½p represented by the 2 x 2½p and single ½p stamp.

On close inspection the year on the datestamp does appear to be 1975, by which time the 2nd class postage rate had risen to 5½p.  At the same time the recorded delivery fee was 7p, so the correct postage would have been 12½p (or 14p for 1st class).  We will never know whether this was handled under the recorded delivery system or not - but if it was, it was underpaid by 7p.  I suspect the sender knew what postage was required for the letter.  The Post Office almost certainly affixed the recorded delivery label, and may even have taken the fee - but if they did, they forgot to apply the extra 7p stamp!