Registered Postal Stationery Envelopes and labels (or not)

This is a subject that I may well make into an online display, since I already have many pages which I have shown to our local club.

Whilst the pre-war rates were interesting, and foreign usage especially ripe for various combinations of adhesives depending on weight and insured value, one of the best periods is the 1970s, as I am of the opinion - until proved otherwise - that many of the envelopes used in that period of rapid inflation in postal rates, were never used at post offices without the addition of adhesives because the rate had increased before they could use them.

And in some cases, uprated stock was further uprated, especially in 1975 when the postage rates increased twice.   But that's for later.

The letter was posted from Yeovil to a holiday camp in Paignton, presumably containing a deposit in banknotes for a holiday booking - not everybody had a bank account, and cash payments were common 50 years ago.

The Goldcroft sub-postoffice used registration labels captioned Yeovil, with the branch identification the numeral 5*.  But apparently Goldcroft's supply of labels had been exhausted and not replenished (hard to believe), or lost!  So the postmaster improvised in manuscript, and recorded the letter in the ledger as usual. 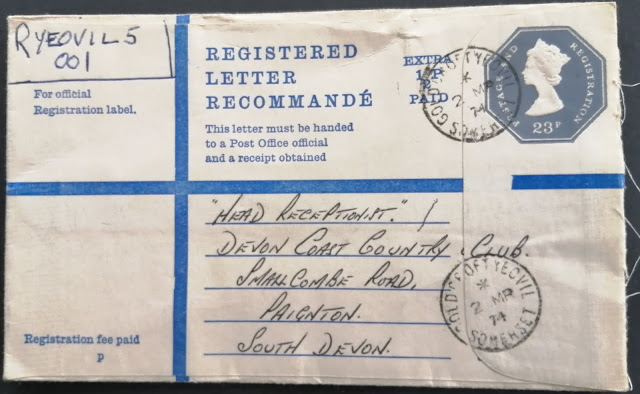 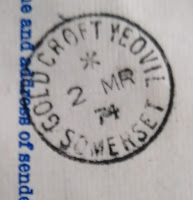 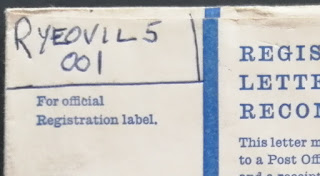 Fifty years ago, while many people rescued the mail from their office, few kept the envelopes intact - they did it mainly to collect the stamps.

* More about this on the Somerset Postal History Blog.

We don't know how long this situation at Goldcroft lasted, nor how many registered letters were sent.  But what we do have is a rescued cover with a story behind it.  Whilst manuscript registration 'labels' are relatively common in many African countries and some islands in the West Indies, this is the first I have seen in the UK.