The last 12 months of the Covid-19 pandemic have been difficult for all of us, and for postal operators there were, back in the spring, sudden and immediate difficulties when many countries imposed travel bans leading to an almost complete cessation of airline travel.

Although airfreight was still being carried, a lot of mail is normally carried on commercial passenger flights and this introduced many delays into mail delivery.  Not only that, but postal operators around the world had to pay more for their cargo to be carried.  This, coupled with changes to the Terminal Dues (TD) process forced on UPU members by the USA, meant that tariffs changed, and for Royal Mail, that meant more than one change.

Small Parcel prices were increased effective 1 July as a result of that TD change; this had no effect on letters and no new stamps were issued.

But no new stamps were issued.  This was unfortunate with no 3p, 8p or 13p stamps available and up to three make-up stamps had to be added to the old rate stamps. (*This now covered worldwide letters to 20g and Europe letters to 100g so was a very well-used rate. Fortunately some commemorative stamps were soon issued.)

This was rectified in December when new stamps were issued in readiness for another change on 1st January 2021.  The new stamps included two for large letter rates which came into force on that date, a re-issue of the £2.55 value (a new printing), and a new £1.70 stamp.  These stamps were issued on 23 December, meaning that they could be used for the existing (1 September) rates before the new tariff was in force, although a little late for Christmas!

A customer in Israel sent a scan of this cover for the clean quality of the slogan, which was useful for the slogan postmarks post on our 'Latest News' blog. 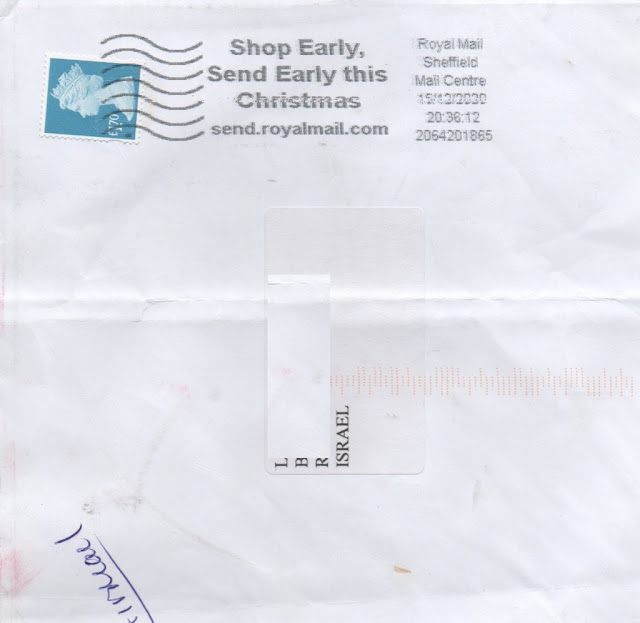 As you can see this is the new £1.70 stamp issued on 23 December, but here it is used on a 20g letter to Israel from Sheffield on 15 December.  So a pre-release by a post office in Sheffield's area - but a stamp which it would have been very useful to have had three months earlier!

It's very difficult to get non-philatelic use of special stamps these days, especially the airmail rates.  Whilst serious postal history collectors like to have them used 'in period' it is very difficult to get agreement from them on just what this means, especially currently.  Is it "before the next stamp of the same or equivalent value is issued"?  Is it a fixed period, such as 2-3 months?  Well with fewer letters being sent abroad in 2020 due to flight cancellations and non-acceptance by the destination country, the period could perhaps be stretched quite a long way.

Stamps marking the End of World War 2 were issued on 8 May 2020, so January 2021 might be considered over-stretching the definition, but this is definite non-philatelic use, again to Israel, in January 2021 - by which time there had been three tariff changes!  This £1.63 rate stamp showing the Rangoon Memorial, Myanmar, passed through the postal system unscathed and unsurcharged from Romford Mail Centre. 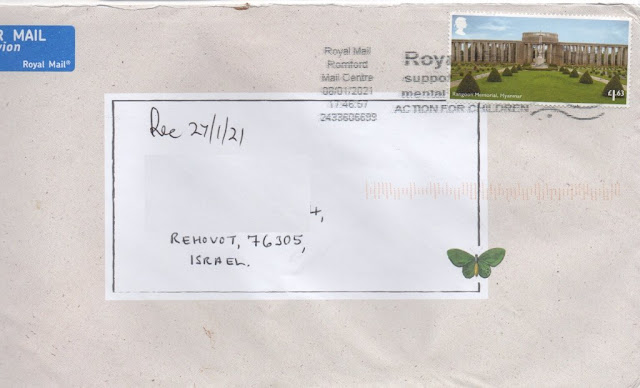 Postal History is being made daily.  Look closely at your incoming mail, and anything that friends and relatives offer you.  You never know what you might find!  Happy Hunting.